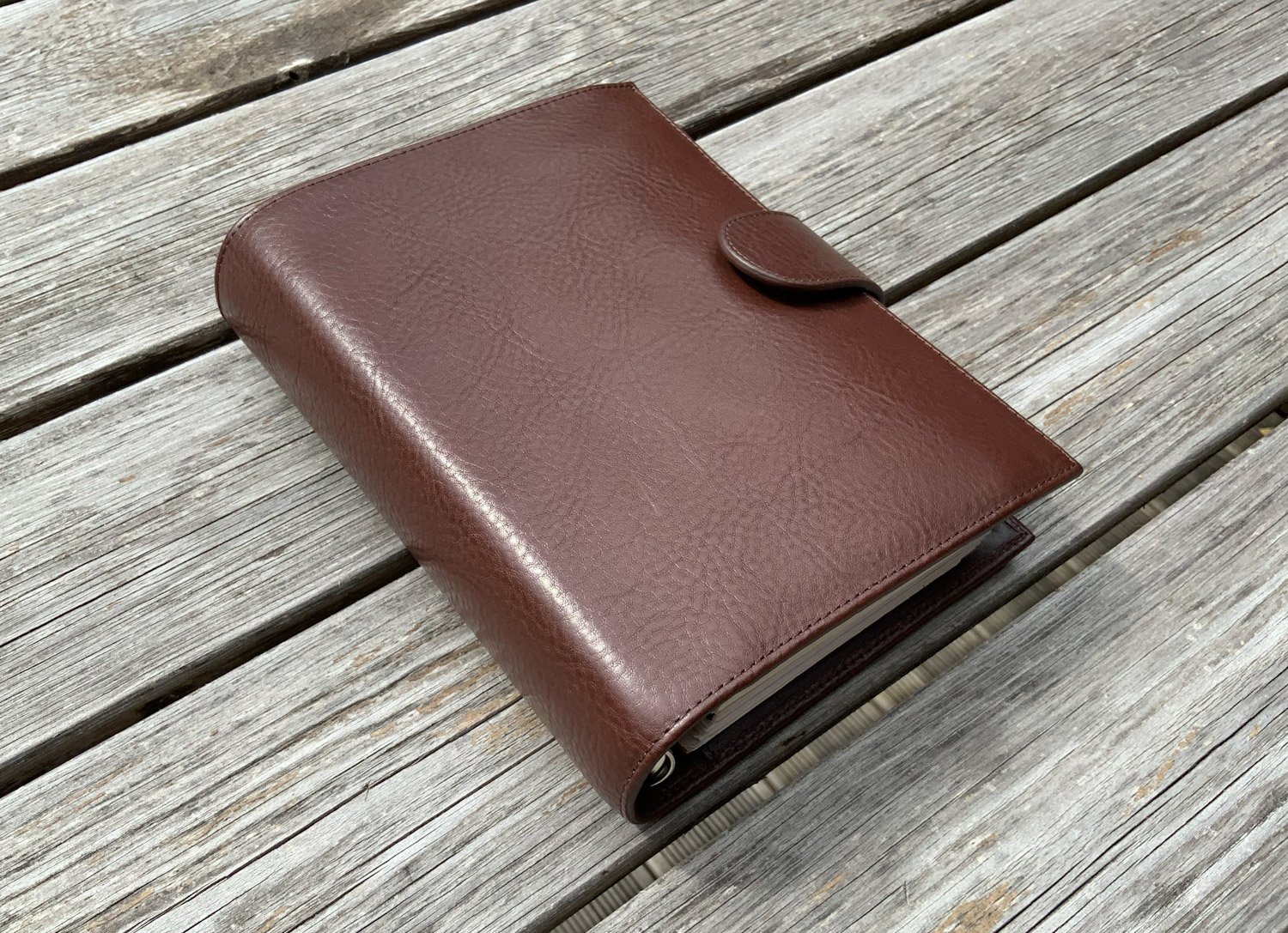 Ironically, one week after me posting a rant on how it was impossible to buy Gillio (after having failed to order a medium Compagna XL in undyed) they released a slew of medium XLs. Their servers were unresponsive for ten minutes this time, but they hadn’t sold out when I finally was allowed in and I ordered a medium Compagna XL in brown Epoca. Had gold been available I would have gone for that, but I’m glad it wasn’t because I have too many planners in gold Epoca already and I’m really loving the delicious chocolate brown.

The layout is the same as in regular mediums and to me it’s the epitome of good planner design. It just has everything you need and then some. For instance, I don’t really use the pockets on the verso side secretarial pocket or the credit card slots on the recto side, but they discreetly waits in the wings for the day I need them.

The main selling point of the XL (and the reason I bought it) of course is the 30 millimetre rings. I got them in silver, because I can’t stand mixing silver poppers with gold rings (all the while I yearn for days past, when Gigliodori/Gillio sold planners with all gold hardware—I have two of them). The rings are glorious, of course. I was hoping to be able to fit a full year’s worth of day-on-a-page inserts, together with my productivity system inserts, and they almost manage it. It all fits, but barely and I should probably take some pages out for the rest to turn without friction. Unlike on some competitors, the holes on the flyleaf is large enough for it not to catch on the rings, which makes me happy.

The backplate on this Compagna is a lot broader than I’m used to in my regular medium Compagna. I like it a lot, since the planner gets a squarer spine, more akin to a bound book. It looks like it also will reduce ring indentations on the secretarial flaps as well. I worry a little about the backplate wearing out the back pocket lining, but time will tell. 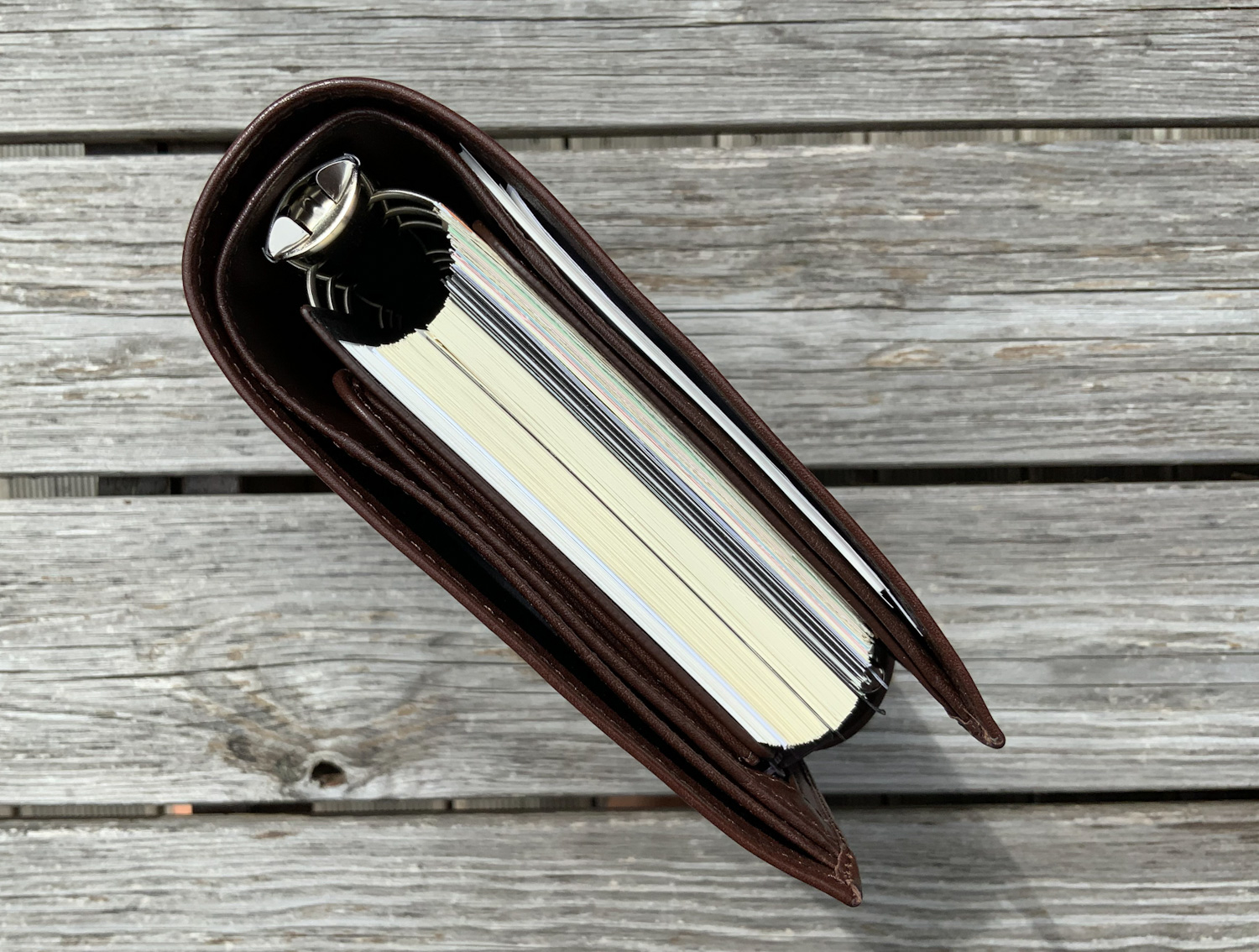 I recently tried to purchase a Medium Compagna XL from Gillio, when they did their latest release of it in undyed leather. I didn’t particularly want the undyed leather, but who’s to know when they release the XLs again. It went on sale at two pm. I tried to access their site from ten minutes to two, and didn’t manage to connect to their servers until three minutes past. At that point everything had sold out. This is an old story, I know: the demand for Gillio’s planners is so much greater than their production rate, so there’s a race everytime they release something.

While I’m happy for Gillio’s success, do I really want to compete against the world for one of their planners? Not really. I find it awfully off-putting. Instead I contacted Petra at Van der Spek and asked what it would cost me to have them make me a planner of similar layout to the Compagna XL. Sadly, the price was close to twice that of the Compagna. Everything outside their standard configuration is extra and it racks up really fast. While I love the care and craftsmanship Van der Spek puts into their work, I have a hard time justifying that cost at the moment.

So, back to Gillio. I really wish they would consider (or perhaps reconsider) changing their current system for new releases. I can’t imagine them being happy with how things currently stand: listening to people like me voicing their frustration and forever (in vain) paying more to have their servers handling those huge spikes in traffic.

Instead of collecting email addresses to notify when an item is in stock, make prospective buyers sign up for a waiting list. Use software automation to delete duplicates and annually purge the list (for instance by sending everyone an email, to which you must reply to hold your place). When an item is in stock, let the software email the first person on the list. If they decline to buy, or don’t answer within a set period of time, move on to the next. Very little human labor would be required for this. If Gillio insist on luck being a factor in their purchase experience, they can always have a raffle with every release, where a few people on the list may get ahead of the line.

It would take them longer to sell out new batches, but the server load would be more even, and I suspect many people are like me in the sense that they find it easier to accept waiting on a list instead of repetedly going into battle.

For now, good luck buying Gillio. May the odds forever be in your favor.

For the month of July I intend to do what Cal Newport in his book Digital Minimalism calls a digital declutter. For 31 days I’ll abstain from the use of Facebook, Instagram and the like. I just don’t like how I behave around these engineered endless sources of dopamin hits. These are my rules:

Apart from that, no optional technologies.

I plan to put my iPhone in a drawer and only use my Punkt MP01 when I’m out and about. We’ll se if that’s even possible these days.

I’ll try to fill the void with good old-fashioned reading and practicing being bored. 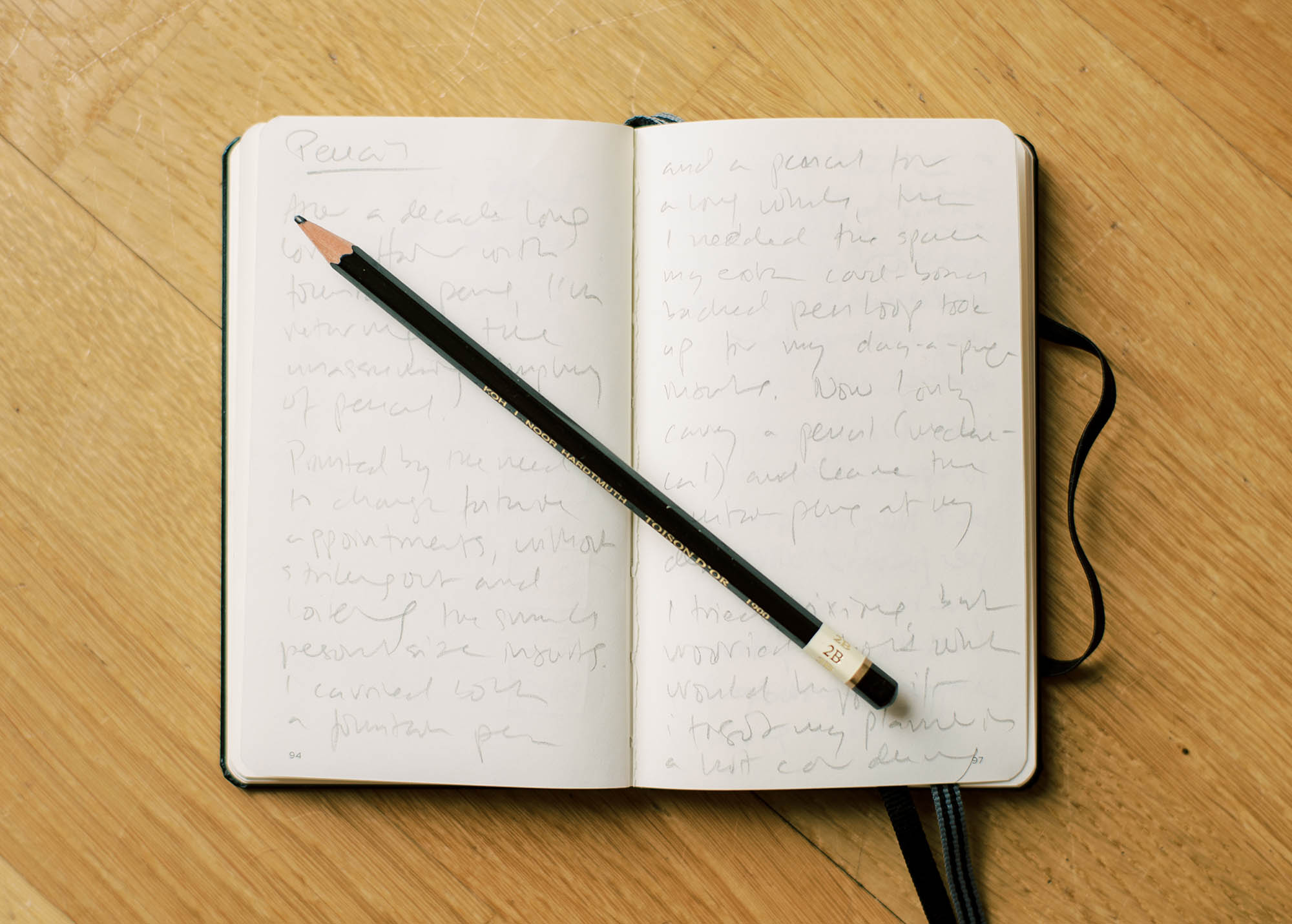 After a decade-long love affair with fountain pens I’m returning to the unassuming simplicity of pencil. I used to only keep a Pilot Vanishing Point in the pen loop of my binder. Prompted by the need to change future appointments in my diary, without loitering the paper with ungainly strike-outs, I added a mechanical pencil, a Rotring 600 kept in a second pen loop on the rings themselves. The future would be written in pencil and the past in many-colored ink. Then I switched to a day-a-page diary format, and suddenly I needed every last millimetre of ring space I could find and that second pen loop became a problem. The only sensible thing was to put my mechanical pencil in the pen loop and let the Vanishing Point stay on my desk. While I do prefer the traditional wood encased pencil that becomes duller with use and that periodically makes you take a break to sharpen it, they are a bit unpractical to put in a binder or in a bag.

Pencil does look lifeless and dull, but it solves the problem of erasability like no other. I briefly toyed with the idea of using FriXion pens, but a brief experiment where I blew hot air on a sheet of writing and watched it disappear before my eyes made be scoff and donate them to my daughter. I also tried using colored pencil, but they were waxier than graphite and didn’t come of the page as easily. The invention of the wood encased graphite pencil is at least 500 years old and it has survived for a reason. It’s cheap, it’s resistant to heat, damp and time and it can vanish without a trace when you want it to.

I wonder if there’s a psychological component to using pencil that slightly changes how you write too. The optional impermanence lets your thoughts flow freely and uncensored, tricking your mind into not taking itself too seriously. Pencil is for the quiet thoughts, the shy thoughts, the soft whispers that drowns in the chatter of the colorful. Pencil is for the things that matter.

Justine Haupt built her own cellphone, with a rotary dial and dedicated buttons instead of a general purpose touch screen. I really wish I had the engineering skills to pull something like that off.