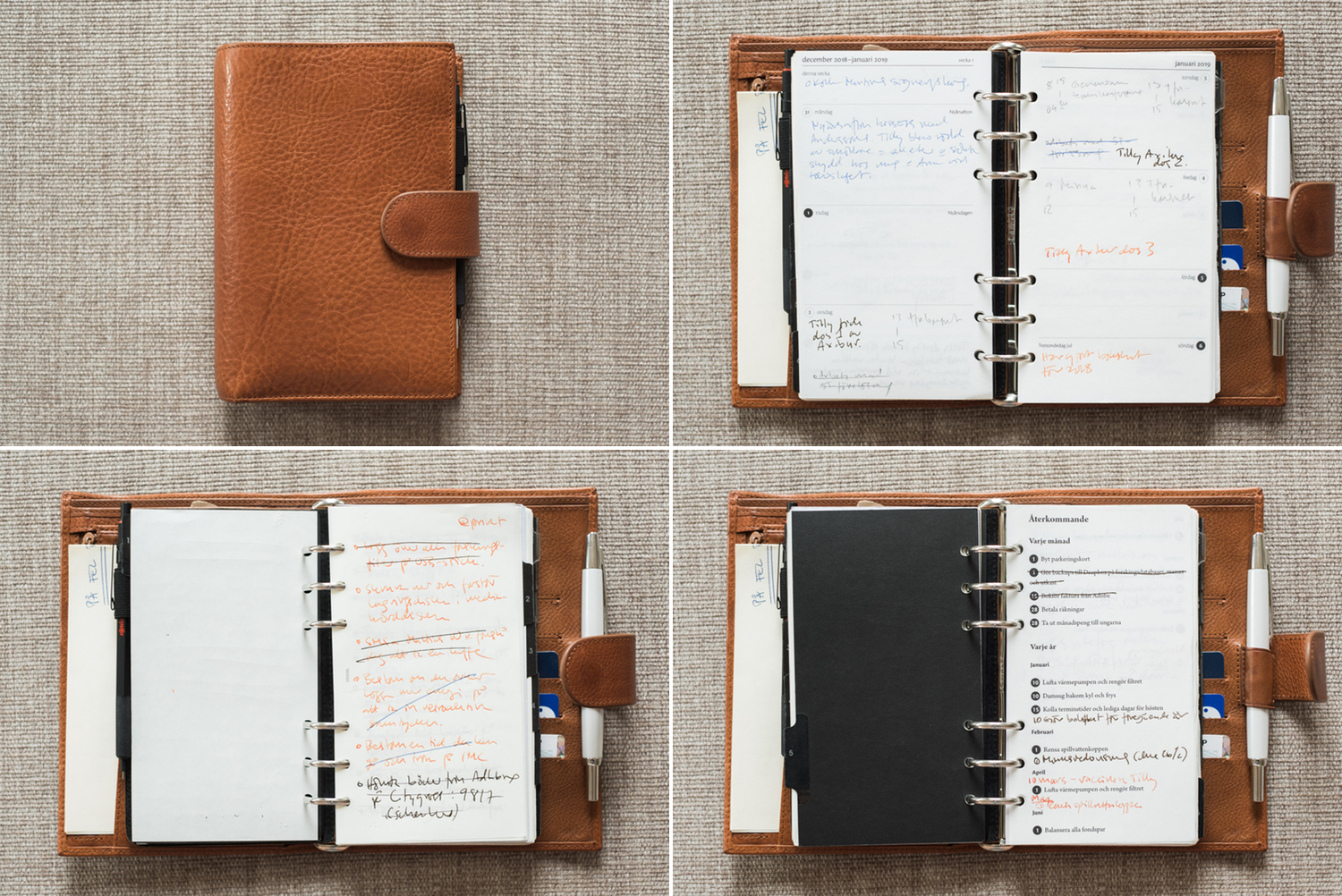 I discovered David Allen’s Getting Things Done (GTD) back in 2005, when my wife and I had just become parents for the first time. We lived in a rented apartment i Malmö back then and I was busy doing my internship in psychiatry. If I remember correctly I discovered it through Merlin Mann’s website 43 Folders and it seemed to be the favourite computer nerd pastime of that era. In 2005 there were no computer applications available for GTD. The closest you got was by using a collection of AppleScripts together with Omnigroup’s OmniOutliner (that collection was Kinkless GTD, which heavily influenced the development of Omnifocus). There were no smartphones either (I had a Motorola Razr, which could hold MP3 files!). GTD seemed awfully convoluted to me, but I decided to give it a try, and I bought myself a Filofax slimline Finsbury and marked up a few dividers with appropriate labels.

This first setup worked well. I had problems with GTD of course, the same problems I think many people have, namely doing the actual work involved with collecting, clarifying, processing, reviewing and doing the tasks. For some reason I always got anxious when it was time to sit down and make decisions on all the stuff I had collected, which meant I did not do these reviews nearly as often as I should have. My brain likes to rebel against any structure imposed on it, even when it comes from itself.

When the digital systems matured and smartphones entered the equation I jumped on them in the hope that they would fix my troubles. I have flirted with Omnifocus and Things these past ten years and I can confidently say they never fixed anything for me. While they are wonderfully fun, and while they make it so much easier to collect information arriving digitally, they obviously do not do the actual work for me. I quickly realised one of their greatest strengths also was one of their greatest weaknesses: since you can toss an unlimited amount of stuff in them, things quickly start to pile up. They are all Tardises—small on the outside but big on the inside. When things pile up, my mind tends to go numb and I stop seeing the important stuff. I tried to fix that by setting deadlines and flagging (or staring) things, but if skipped checking in on my GTD app for a few days all those missed deadlines started piling up too. All those Peters crying wolf made my mind grow even more numb.

In the end I simply do not want to be too dependant on digital systems to support my memory and decision-making. I strive to keep it as simple as possible. For the past few years I’ve relied on a paper diary I make myself and a few lists that holds my projects, action lists and my someday/maybes. I keep all this in my ring binder, that goes with me most places. Sending my future self information is no more difficult than placing a post-it note on the appropriate diary page, or if it is far, far in the future on a sheet if paper that I put in the binder section that I review for future projects. When I have crossed of all the actions on a specific page I get to physically tear it out and toss it, which is an immensely satisfying feeling. I never had that feeling with digital systems, where lists fill up as quickly as you check items off and simply seem to go on forever. I also find my analog system more forgiving than Omnifocus or Things. Things stay where I put them, even if I do not check in on them for a few days.

There are difficulties with an analog system too, of course. The biggest one is handling all the emails, texts and other digital information that comes your way. I have not found a satisfactory way of dealing with this yet. For the most part I just leave the digital information in their system and write a reminder in my binder.

All in all, my paper based system has proved itself to be more robust than all the digital systems I have tried. It supported me throughout my thesis work a few years back and if it can handle that it can handle anything.